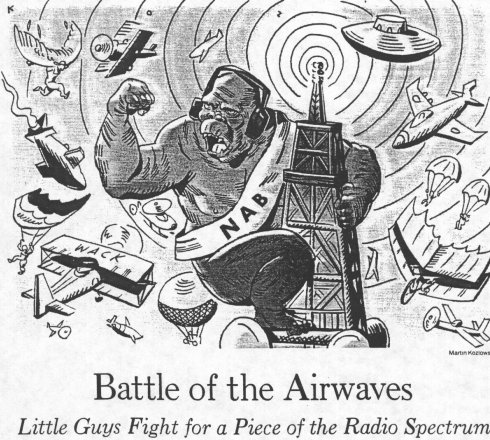 Battle of the Airwaves Little Guys Fight for a Piece of the Radio Spectrum
By Kathy Chen
Being blind, Steve Hopp has little use for cooking shows that offer instructions like "brown the meat." But he proposes a solution -- his own radio station that would cater to the blind in his hometown of Nashville, Tenn.

"I'd get blind cooks who can explain how to tell meat is cooked by its texture," says Mr. Hopp, a 28-year-old producer of radio commercials. "I'd feature music by blind musicians. I'd do a blind version of the traffic report -- what sidewalks are under construction."

At the moment, it's wishful thinking for Mr. Hopp, who can't afford to buy his own station. But the Federal Communications Commission might help: It has proposed opening the nation's airwaves to hundreds, maybe thousands, of small, low - power radio stations.

In theory, the reach of these "microradio" stations would be limited to a neighborhood or a small, rural community. They would use parts of the dial that aren't occupied by existing full-power stations and would transmit to areas not served by existing stations. Most important, they would be affordable by people like Mr. Hopp. The goal, says FCC Chairman William Kennard, is "to facilitate a new class of voices."

The proposal has sparked grass-roots interest nationwide, uniting people as diverse as a Hispanic pastor and a New Jersey police officer, local councilmen and fringe musicians. They harbor different reasons for wanting to start their own stations, but many cite a common complaint about radio today: After the 1996 Telecommunications Act eased ownership restrictions, they contend, consolidation in the radio industry led to a marked decrease in local flavor and diversity of voices. This, along with the surging prices of radio stations, is making it harder to get varied voices and music on the air.

"It's hard to imagine a democratic state where the media are controlled in the hands of a few," says Tom Ness, publisher of a local-music magazine in the Detroit suburb of Ferndale and an active supporter of microradio. "We need to promote diversity if we are to avoid a homogenous cultural state. But now local bands can't get air play. Local retailers can't afford to buy ads."

But low - power radio faces a political challenge from incumbent broadcasters and their powerful lobbying group, the National Association of Broadcasters. "This is the most serious issue to face the radio industry in 30 years," declares association spokesman John Ernhart.

The group has asked the FCC to delay any action for at least three months so broadcasters can conduct technical studies. It has mobilized its members to lobby local and national legislators; Republican Rep. Billy Tauzin of Louisiana, who is the chairman of the telecommunications subcommittee, recently wrote to Mr. Kennard demanding that the FCC "take no further actions on this agenda."

Dale Hatfield, the FCC's chief engineer, says today's improved technology means radio stations can be placed closer together on the spectrum without causing interference. But he admits that the industry's plan to go digital complicates matters. He says the FCC is considering possible solutions, such as decreasing the number of low-power stations to be allowed.

Economics is also an issue for broadcasters. Bruce Goldsen, owner of three radio stations in Jackson, Mich., a city of 50,000 west of Detroit, lists the community-oriented programs his stations offer: a talk show focusing on local issues; coverage of local fund-raisers; promotion of local bands. He worries that low-power could rob him of listeners. "If I talk about economics, it's going to make me sound like I don't want competition," he says. "But the guts of the economic argument is, there's only so much money in a market."

While a full-power radio station is beyond the means of most individuals, a would-be broadcaster could cobble together the small-scale transmitter and other equipment needed to operate a microradio station for less than $1,000. The FCC hasn't decided whether it would allow such stations to operate for profit, but their affordability has helped sparked a flood of inquiries to the FCC, totaling some 13,000 in the past year.

For many would-be operators, profit isn't a motive. Mike Mastronardy, police chief for Dover Township, N.J., says local police could use a microradio station to announce traffic updates, school closings and directions to baseball games. Local radio stations carry some of this information, but many of them are trimming local-news coverage and reporting staffs. As a result, the chief says, "people are tying up our phone lines" with inquiries.

In Cleveland, Felix Velez, pastor of the First Spanish Baptist Church, envisions a Spanish-language radio station serving the local Hispanic community. As the pastor sees it, the station would address such community problems as youth gangs and drugs and "show there is hope." In Albuquerque, N.M., Michael Brasher, a city councilor, says low - power radio would allow citizens to tune in to council meetings without incurring any cost; currently, only cable television carries such programming.

Their shared interest in low - power radio has united many of these people in a battle against the broadcasters' association to push for the FCC proposal. Groups have sprung up across the country, from the Low - Power Radio Coalition in Washington, D.C., to the Microradio Empowerment Coalition in San Francisco, and they regularly swap information and strategies over the Internet.

Chatting from Xhedos Cafe, his coffeehouse in Ferndale, Caleb Grayson says numerous local bands such as the Immigrant Suns, which plays a blend of Eastern European folk and rock, should be getting on the air but aren't. An experimental musician himself, Mr. Grayson would like to set up a sound booth in his cafe to transmit performances by visiting musicians, and possibly by his own band. "Here we are at the heart of a historic music city, and we can't get access to the public airwaves," he grumbles.

Other microradio supporters are preparing by operating radio stations over the Internet. After hearing about the FCC proposal, Mr. Hopp, the blind radio-commercial producer, set up his own Internet station featuring 1970s and '80s music and talk around the clock. He reckons at least a dozen people have been tuning in at any one time since he went on the air a month ago. Now he's ready for the big time: If the FCC decides to give the go-ahead for low - power radio, Mr. Hopp proclaims, "I'd instantly be on the air."